Previous Next
Good Jul in Poulsbo

As the mournful sound of a blowing horn pierces the night, a ship appears on Liberty Bay, rowed by Vikings and lit by torches. It bears the Lucia Bride, a young girl dressed in white robes, her head alight with a glowing crown of candles.

The ancient Scandinavian tradition is kept alive in Poulsbo by the Sons of Norway, a 100-year-old organization, whose members honor their heritage each December by dressing like Vikings and lighting the night with a ceremonial bonfire.

“All free folk gather round and keep silent,” intones head Viking Magnus the Wide, who wears the fur-trimmed hat and wool cloak of a 10th century Norse tradesman.

He tells the story of St. Lucia (loo-see-uh), a first-century Christian martyr, who wore a crown of candles to light the way when feeding the poor. In the late middle ages, she was adopted into Scandinavian culture after being credited with miraculously bringing food to a starving Norse village.

Poulsbo’s Lucia Bride feeds the crowd saffron buns and lights the bonfire, which needs a boost from many Viking torches to get going on this rainy Julefest night. 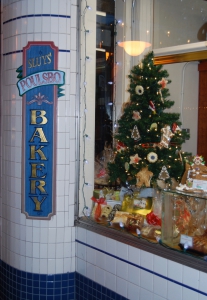 As the fire catches, Magnus the Wide shares a wish that its “light and warmth will surround us all.”

The celebration continues at 6 p.m. Dec. 14, when the Sons of Norway hosts a Family Lucia Party that is open to the public. Click here for information.

Visit Poulsbo, also known as Little Norway, any time of year for a feel and taste of Scandinavia. Sluys’ Bakery carries Norwegian cookies and the traditional flatbread known as lefse year-round and Marina Market has a wide selection of Northern European foods, including lutefisk.

The Vikings will be there to wish you velkommen.